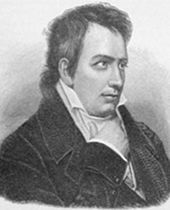 Ludwig Tieck (1773-1853) is known for the diversity and the density of his work. His long life contributed to this: born under the finishing Enlightenment he rebelled against, he dies at the service of the monarchical restauration that follows the 1848 Revolution. His work reflects this multiplicity of aspects, too.

There has not been to this day a complete and systematical edition of his works and letters. The texts we edit here intend to come as an addition to the existing editions. They shed light on his youth (first romanticism) and his novellistic period (1820-1830).

The drama Roxane, written between 1789 and 1791, is part of the early work of Ludwig Tieck. The fragmentarily preserved manuscript (starting at the end of the first act) is kept in the Manuscript Department of the Staatsbibliothek zu Berlin.

Despite being hitherto unpublished the manuscript bears traces of a careful reception. Tieck's schoolmate and occasional co-author Wilhelm Heinrich Wackenroder annotated the drama on the borders of the manuscript and Tieck's biographer and literary executor Rudolf Köpke added the title and foliation.

As an additional reference point the diplomatische Umschrift of Roxane offers an explicit numbering of the scenes in square brackets.

Ludwig Tieck and Friedrich von Raumer's friendship begun in the 1810s, at first with a polite distance. After the death of their common best friend Karl W.F. Solger in 1819, their relationship became more intense. The publication of Solgers "Papers and Letters" in 1826 was a common endeavour. In the 1820s and 1830s, the poet and the historian exchange letters dealing with their own works, the political and literary actuality, but also with Shakespeare. They tell about their travels – and try again and again to solve Tieck's never ending money problems.