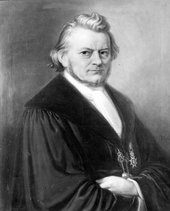 Immanuel Hermann Fichte (1796-1879), the only child to Johann Gottlieb Fichte, studied philology and philosophy at the newly founded university of Berlin from 1812 to 1818 and later became professor of philosophy in Bonn und subsequently in Tübingen.

When 21 year-old Immanuel Hermann Fichte submitted his PhD-application together with a doctoral thesis to the faculty of philosophy in 1817, the professor for mineralogy Christian Samuel Weiß had the serious suspicion that the thesis was a posthumous work of Johann Gottlieb Fichte, who had died three years before. Classical philologist August Boeckh, who knew Fichte junior from his philological seminar, took sides with his former pupil and exposed all the proofs he had to make the demonstration of Fichte junior's authorship.

In this edition documents the circular letters of the professors (in which they discuss the allegation of plagiarism) as well as the doctoral thesis of Immanuel Hermann Fichte are made accessable to the public. The reference sources originate from the archive of the Humboldt University Berlin.